Taking your photography to the next level could be as simple as following the Rule of Thirds, a basic and easy to use composition technique that can increase viewer engagement, maximize visual impact, and transform your images from good to great.

The Rule of Thirds provides a means of reliably creating balanced, visually pleasing photographic compositions based on the way the human eye naturally moves and focuses when viewing an image.

Though the principle has been used by artists throughout history, the technique was first described and given its name in the 18th century by painter, author, and engraver John Thomas Smith. Since that time the Rule of Thirds has become one of the most widely recognized and followed photographic techniques.

The Basics of The Rule Of Thirds

The Rule of Thirds is based on dividing an image into a symmetrical 3 x 3 grid like a tic tac toe board, with two equally spaced vertical lines that intersect with two equally spaced horizontal lines. Visualizing the grid overlaying your image may be challenging at first, but it quickly becomes automatic and effortless as you consistently use the Rule of Thirds to compose images.

In some cases, your camera can actually do the visualizing for you; many digital cameras have a convenient built-in function that allows the photographer to actually see the grid through the viewfinder. 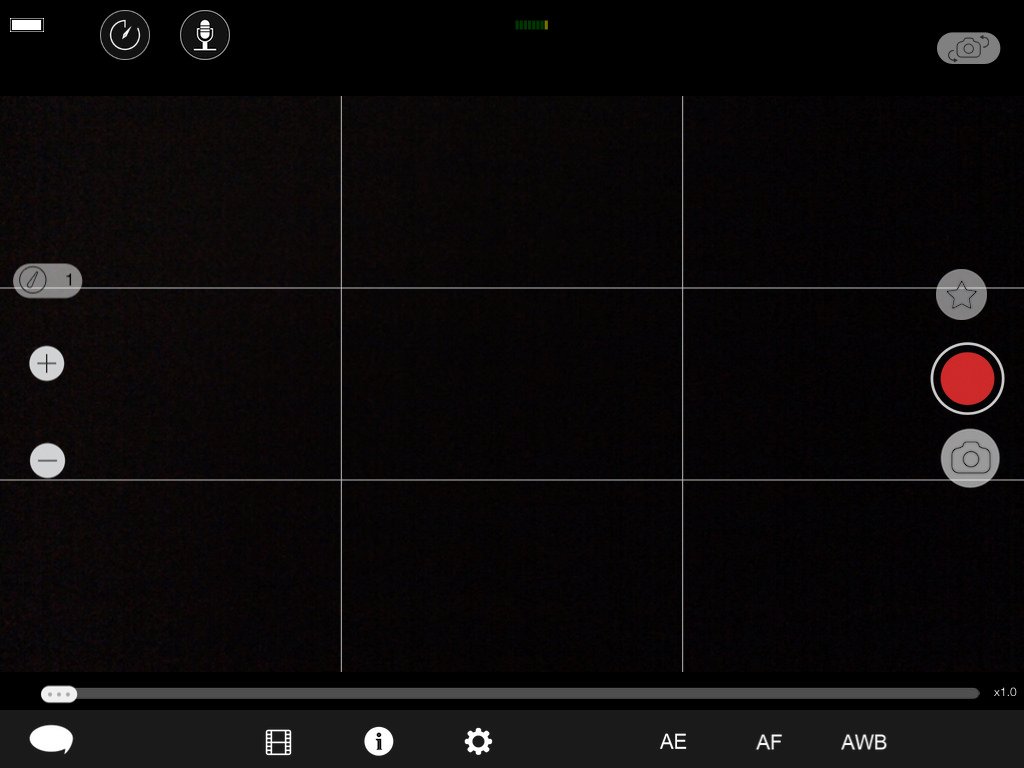 The theory behind the rule is that placing objects of interest on the intersection points or along the lines rather than in the center of the picture will not only create a balanced and visually appealing image, it will enable viewers to interact with the image more naturally; studies have shown that most people naturally focus first on one of the intersection points rather than in the center of the image.

Using the Rule of Thirds to compose photographs ensures that viewers are immediately drawn to your subject without distraction or visual confusion. In addition, aligning horizontal or vertical lines within the image to the lines in the grid can significantly enhance visual impact and allow the eye to travel naturally around the image. This can be particularly important in landscapes, seascapes, or any image with an obvious horizon line.

Using the Rule of Thirds to compose your images not only reliably creates photos that work with rather than against the way we naturally focus, but it can also add interest and help you tell your story by giving your pictures a sense of movement, energy, and direction.

How To Use The Rule of Thirds

Once you’ve identified the points of interest in your photo, start by determining which are the most important and move around until you have the key elements positioned at or near the strongest intersection points and lines of the grid.

The objects in your image don’t have to be lined up to fit precisely on the grid; close will do, but the closer, the better. Ideally, the most important point of interest in the image will be lined up with an intersection point. 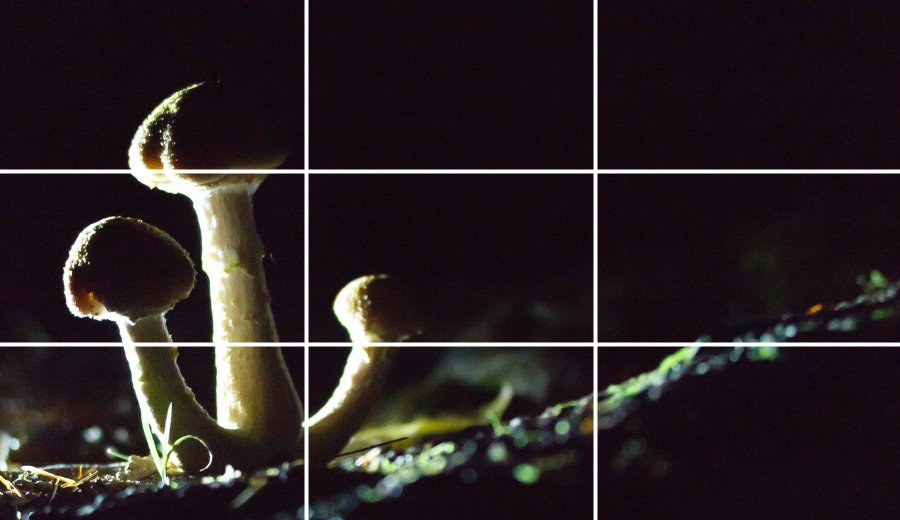 But rules are made to be broken, and it’s always worth trying a solo subject on both grid lines to see which works best with all the other elements of the photo. 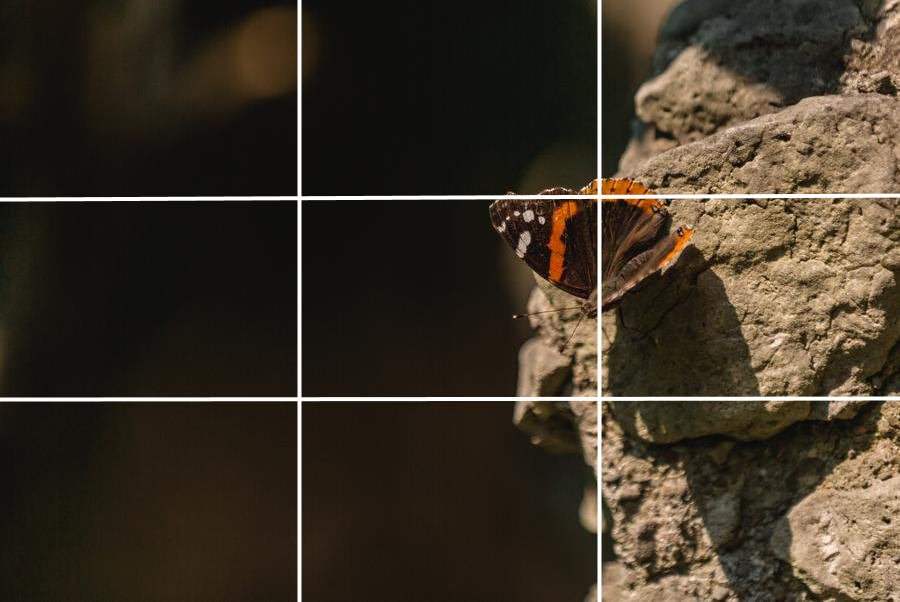 Using The Rule of Thirds in Landscapes

The Rule of Thirds can clarify the key element in a landscape photo by guiding the viewer’s eye and eliminating visual confusion.

Putting the horizon line in the center of the image tends to effectively cut the picture in half, which can stop the eye from moving naturally around the entire image.

A centered horizon line can also make it difficult for the viewer to determine which part of the picture is the primary focal point.

Aligning the horizon with one of the horizontal grid lines clearly establishes the subject and creates a sense of flow that allows the eye to travel naturally around the picture. 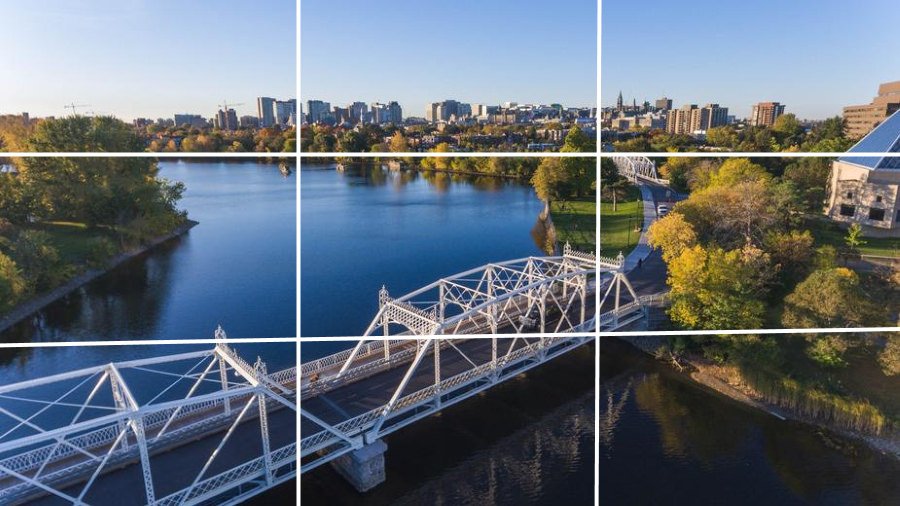 Aligning the horizon with the top horizontal grid line makes the land and river more important. Aligning the bridge with the lower horizontal line guides the eye into the image

Whether you position the horizon in the top or bottom third of the image will play a major role in the relative importance of land (or water, in the case of seascapes) and sky; generally speaking, whichever segment of the image gets more space will be perceived as more important. 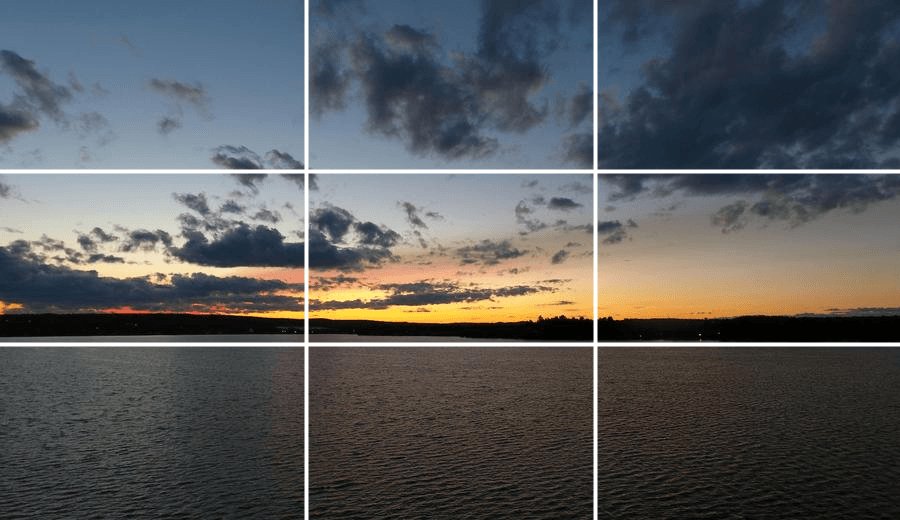 The vertical grid lines are also important in composing landscapes. Placing a large object like a structure or a tree in the center of your picture automatically makes it vie for the viewer’s attention and focus, which may not be desirable if what you’re actually trying to capture is the beautiful sunset. But placing a large object in alignment with one of the vertical lines turns it into an anchor that frames and enhances your subject.

Creating And Controlling A Sense Of Motion

The Rule of Thirds is also important in creating and controlling a sense of motion. If you’re shooting moving object, pay attention to the direction it’s moving and align it such a way that there’s more space in front of it than behind it.

For example, if you’re shooting a boat sailing toward the right, align it with the left vertical grid line. This makes it appear that it’s moving toward the center of the image and automatically leads the viewer’s eye into the picture. Aligning a right-moving object with the right vertical grid line will make it appear that the object is about to disappear and will lead the viewer’s eye out of the picture. 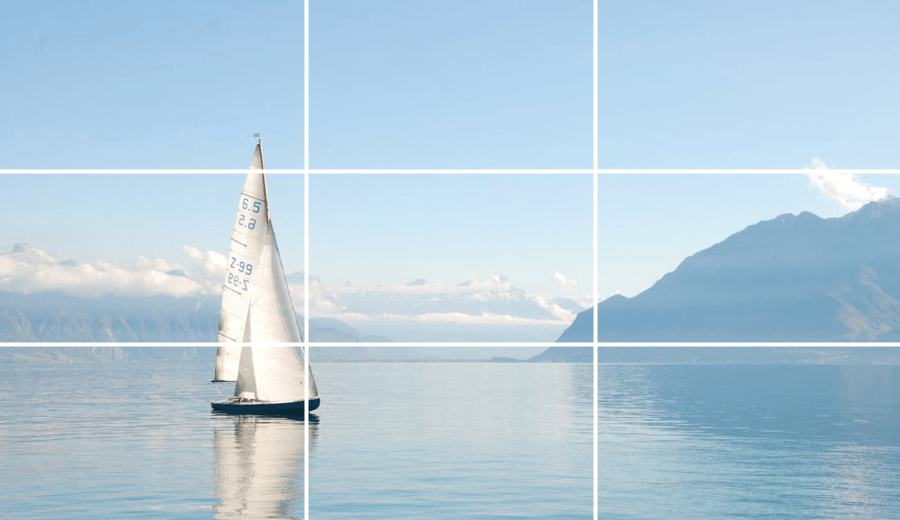 Using the Rule of Thirds to align the important objects in your image can give the viewer a stronger sense of space and help tell a story.

Placing the most important object on an intersection point will tend to bring it forward and give it more impact, while secondary objects placed on vertical gridlines will tend to recede while remaining part of the action. 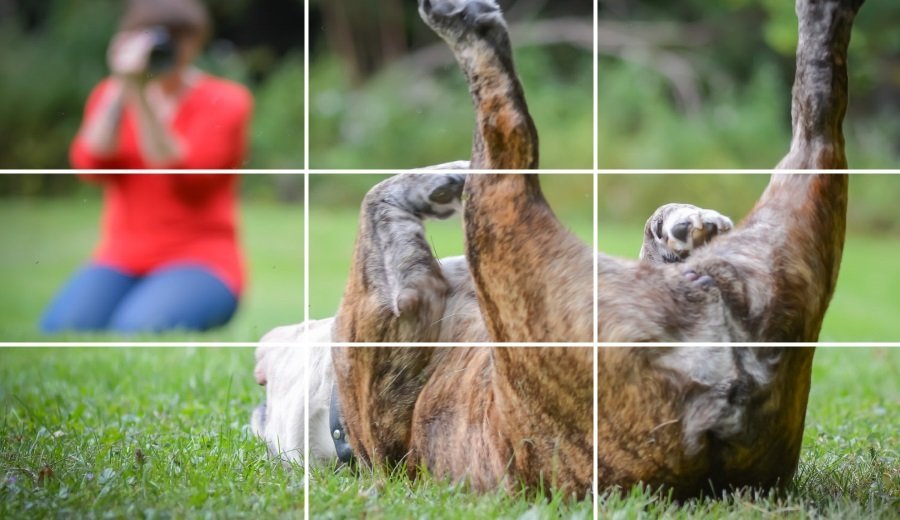 Aligning the dog with the lower intersection points makes it the focal point of the image, and aligning the photographer with the gridlines visually creates a sense of space that helps explain what’s happening in the picture.

Using the Rule of Thirds in Portraits

The Rule of Thirds can be invaluable in shooting portraits, adding balance, symmetry and interest and even helping capture the personality of the subject. 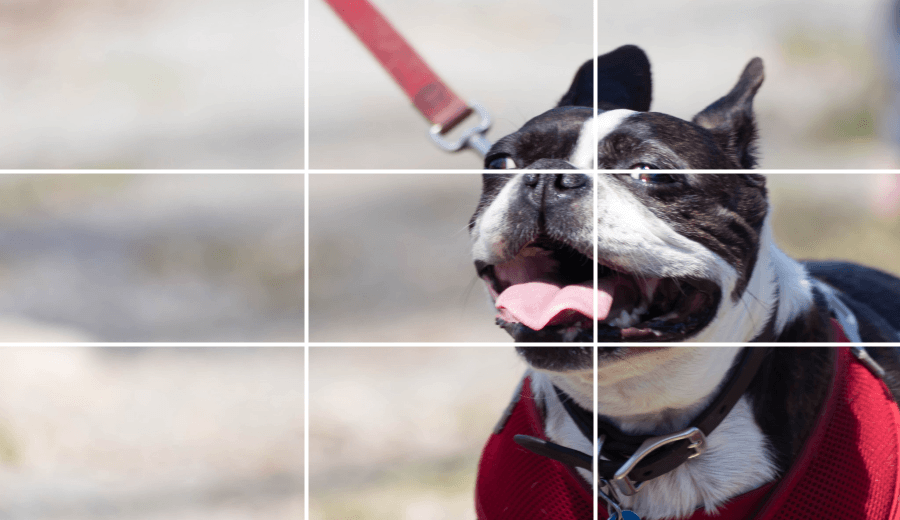 The subject is aligned with the right vertical grid, with the eyes aligned to the top horizontal grid

Whether you align the subject with the right or left vertical line depends to a great extent on which direction the subject is looking.

Aligning the subject with the line that’s opposite to the way they’re looking will lead the viewer’s eyes into the image rather than out of it. 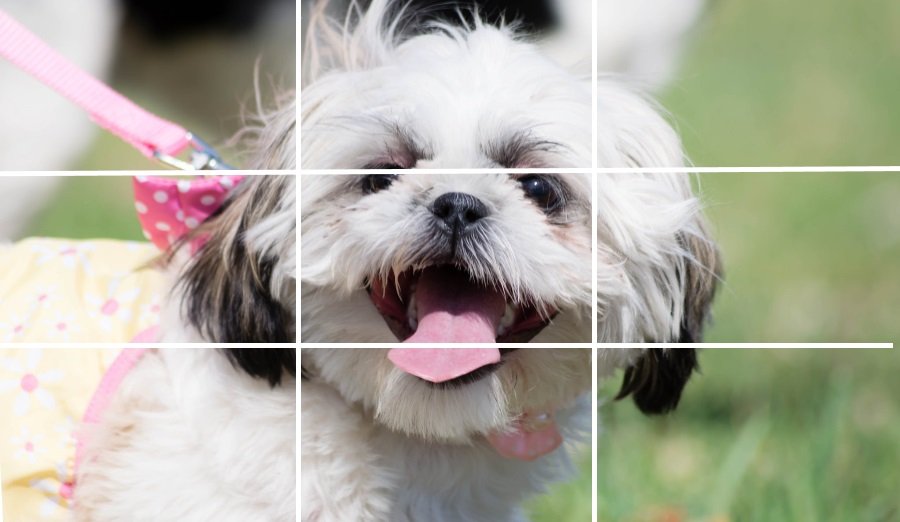 If you’re shooting a group, you can use both the upper and lower horizontal grid lines to align your subjects.

The Rule of Thirds is a great tool, but it’s not the right choice for every photo.

There are times when using the Rule of Thirds will actually weaken or defeat the purpose of your composition. In some cases, centering a subject is the best option; it can help demonstrate a sense of size or space, and centering is an effective way to emphasize the symmetry of a subject.

Headshots should generally be centered horizontally, but using the Rule of Thirds grid for vertical alignment can be useful.

Positioning the eyes along the top horizontal line will generally create a sense of balance and keep the subject from looking lost in the frame.

If you feel an existing image could benefit from the Rule of Thirds, you can always use your trusty editing program to achieve a balanced and harmonious composition.

Many popular image editing programs, including Photoshop, incorporate a Rule of Thirds guide in their cropping function.

If your image editor doesn’t offer this capability you can still use the Rule of Thirds on an existing image by visualizing the grid over your image and cropping it so that the major points of interest are aligned with the grid lines and intersections.

A Valuable Guideline To Be Used With Creative Discretion

The Rule of Thirds is one of the best and most reliable composition techniques, and in many cases using it will result in a stronger, more balanced, and more engaging photo. But like all rules, it’s made to be broken when the situation calls for it. Consider it a guideline, use it when it’s appropriate, but always trust in your own creative judgment.